You are here: Home / Advice / Green Tea With Ginseng: Double the Health Benefits? 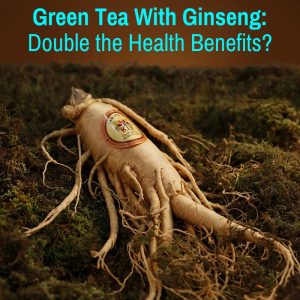 Green tea with ginseng makes a lot of sense.

But it’s a pairing I hadn’t heard of before.

Surprising, since it turns out it’s pretty common. And why not?

Both green tea and ginseng have similar purported health benefits and no serious side effects, so pairing the two seems like a great idea.

Yet, like me, many are unaware of this combination.

Everyone knows that green tea is healthy and the same can probably be said for ginseng. Most people even know several of the actual health benefits of drinking tea and they might even be familiar with some of ginseng’s benefits, too.

But that’s not quite the way it works. Especially since the two have many of the same benefits. So let’s look at the most important benefits a ginseng green tea might offer.

But first, I’ll let you know where you can find good quality ginseng teas online.

Where To Buy Ginseng Tea Online

This is not an easy tea to find online. Most tea shops carry some kind of tea mix that contains ginseng, but none have a green tea with ginseng.

The big exception is Amazon. They have several options, though they all seem to contain other ingredients: usually lemon and/or honey.

The best option is this one with lemon ginseng from Davidson’s Tea. 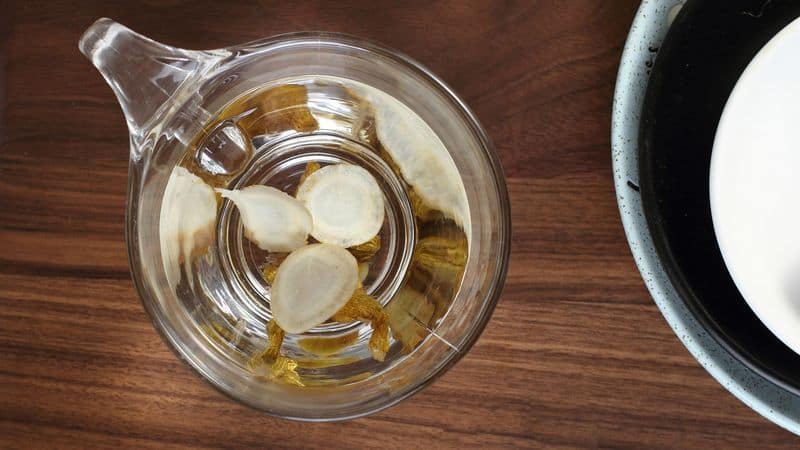 Here are the main health benefits of green tea with ginseng. As always, research into the benefits of both tea and ginseng are inconclusive and much further study is needed.

Ginseng gets a lot of use in alternative medicine as a booster for our immune system. Similarly, green tea is said to aid in preventing cold and flu symptoms, according to this study.

Additionally, the National Institutes of Health (NIH) state that tea can help improve the body’s response to antibiotics and certain vaccines.

Since both components are known to boost our immune system, it stands to reason that the combination would do the same. Sure enough, preliminary evidence suggests that ginseng teas do offer some level of effective immune support, but it is not known for certain whether a combination of tea and ginseng can stimulate the immune system and help in preventing or treating a variety of viral and bacterial infections. More study is needed.

Ginseng and green tea are both generally tied to an improvement in cardiovascular function. The National Institutes of Health has bestowed a “B” rating on ginseng. A “B” means that good scientific evidence exists for its effectiveness in treating certain forms of heart disease, when used in conjunction with standard medications.

As for green tea, the University of Maryland Medical Center has determined the plant to be effective in preventing a hardening of the arteries. Additionally, they claim that drinking green tea can reduce both total cholesterol and LDL cholesterol while also increasing levels of HDL cholesterol (LDL is also known as “bad” cholesterol, while HDL is known as “good”).

As of yet, there is no evidence that green tea with ginseng promotes heart health, but since there is evidence that each of the ingredients do so on their own, the combination is sure to have some kind of positive effect as well.

The combination of green tea and ginseng could aid people suffering from reactive hypoglycemia and diabetes by helping to control fluctuations in blood glucose levels. The National Institutes of Health has found “promising” results when giving ginseng supplements to people with hyperglycemia and type 2 diabetes—the supplements effectively lowered blood sugar levels before and after meals, but did not lower them to dangerous levels.

The UMMC claims that green tea could help in delaying the onset of type 1 diabetes. Furthermore, it can help regulate glucose levels in the bloodstream.

It also found that polyphenols in green tea may help prevent the formation of cancers that affect the bladder, ovaries, breast, lungs, esophagus, prostate, colon, rectum, stomach and skin.

As mentioned, these findings are thus far inconclusive and, in fact, the NIH considers them “controversial” and points out that much further study is necessary to prove the anticancer properties associated with either tea or ginseng.

Pretty much all of the potential health benefits of both tea and ginseng require further study and virtually no studies have been run on ginseng and green tea combined. But the side effects of tea are virtually nonexistent and those of ginseng are generally mild, so trying tea with ginseng should be fine for most people.

Nevertheless, it is important to note that Ginseng could cause nervousness and insomnia, while long-term high doses can result in dizziness, headaches, an upset stomach and other symptoms. Plain green tea can be drunk at bedtime, but you may want to avoid it at night if it contains ginseng.

More importantly, ginseng could potentially interact negatively with certain drugs, so if you are on any medications, you should consult your doctor before trying any ginseng teas. That said, the amount of ginseng contained in them is quite low and unlikely to cause any problems.

If you’d like to give ginseng tea a try, you can find a great green tea with ginseng here. Then fill it into the infuser in one of your favorite tea tumblers and start enjoying!

More general info on green tea and oolong tea can be found on this page.