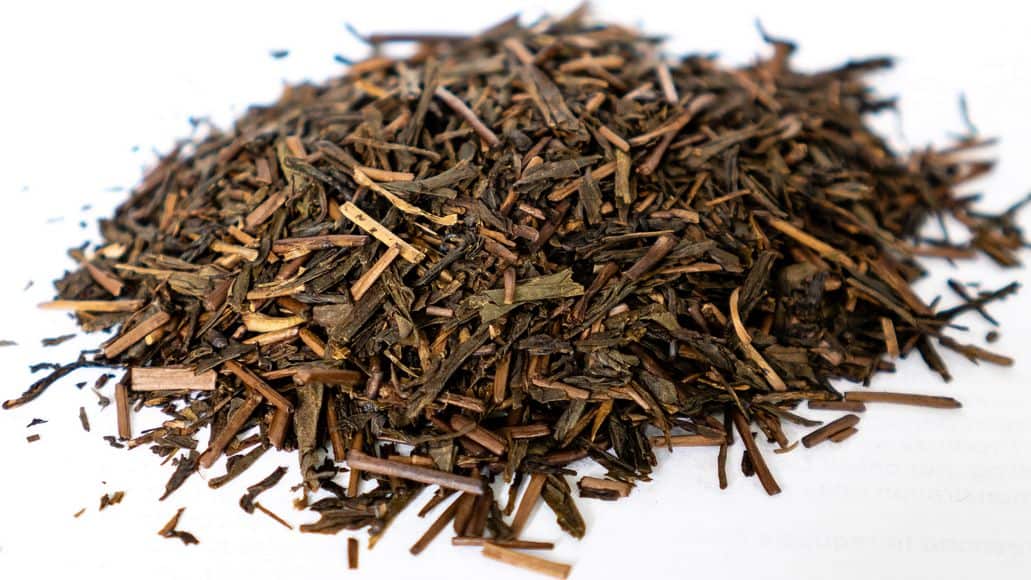 Houjicha is different from other Japanese green teas in that it is roasted in a porcelain pot over charcoal at a high temperature, instead of steamed like the rest. The roasting reduces the caffeine and the catechins in the tea, which makes it less bitter.

The vegetative tones of standard green teas are replaced with a toasty, slightly caramel-like flavor. Due to its mildness, this tea is popular during meal times or before going to bed. It is often given to children to drink.

Where To Buy Houjicha

You can buy this tea in any specialty tea shop or through a number of online vendors. If you are unsure where to begin, you can check out some of my recommendations below.

How To Prepare Houjicha

Houjicha is much easier to brew than other green teas, mainly because you don’t need to worry about the correct water temperature; it is made with water that has just begun to boil, so you can easily just use a simple stove-top kettle.

You can brew hoijicha in pretty much anything, though I like to use a traditional kyusu: Kyusu Japanese Teapot Selection Browse on Amazon
We earn a commission if you make a purchase, at no additional cost to you.

Or a cast iron tetsubin: Tetsubin Japanese Cast Iron Teapot Selection Browse on Amazon
We earn a commission if you make a purchase, at no additional cost to you.

Houjicha is much more forgiving than other Japanese green teas, so even if you don’t get it completely right, you will still end up with a good cup of tea.

Many people already have an account with Amazon.com so it is probably the easiest place to buy tea online. Most of their houjicha is mediocre, but this one from Sugimoto Tea is really good: Sugimoto Tea Loose Leaf Hojicha
$38.83 ($4.85 / Ounce)
View on Amazon
We earn a commission if you make a purchase, at no additional cost to you.

Personally, I prefer to buy from specialty tea shops online. The Houjicha Gold from Culinary Teas is the best deal I’ve found online. It costs half as much as the one above, but the quality is slightly lower, too. Culinary Teas Houjicha
from $4.75
Learn More
We earn a commission if you make a purchase, at no additional cost to you.

Houjicha looks a lot closer to a black tea than a green tea. Both the leaves and the resulting brew often leave newcomers asking: “Why is my green tea brown?” They may even think they bought the wrong tea.

But they didn’t Houjicha is made from green tea and it is unoxidized like green tea, so it is classified as such. Mostly it is made from bancha, but sencha and kukicha are also sometimes used.

The reason it looks more like black tea stems from the processing method. For the most part, it is processed the same as other Japanese green teas. This means that it is steamed after picking to stop the oxidation process, then it is dried and crumpled and then shaped.

After shaping is where the processing differs. Houjicha leaves are then roasted, which other Japanese teas are not. Chinese teas are often roasted, but they are roasted immediately after picking to stop oxidiation. As such, the roasting process replaces the steaming in Japanese teas.

Houjicha is still steamed and then additionally roasted after the leaves have already been dried. The loose leaves are roasted in a ceramic pot over a charcoal fire at temperatures of around 200 degrees celcius. After roasting, they are quickly cooled.

Roasting the leaves at the and of processing like this does several things.

The leaves themselves change color. They go from green to a reddish brown. The same goes for the infusion. While most green teas have a yellowish, greenish color, houjicha brews to a reddish, brown color, similar to a black tea.

Roasting also alters the flavor. It removes most of the astringency of regular green teas, as well as the vegetal flavor. The taste of houjicha lies somewhere between roasted barley and coffee. It has a toasty caramel flavor with hints of chocolate.

The main reason for the loss of astringency is the reduction in catechins brought about by the high temperatures. Roasting also reduces caffeine levels.

Because of the milder flavor and low caffeine content, the Japanese often enjoy houjicha at night before bedtime. It is also commonly enjoyed by the elderly and is given to children or to sick people, because it is nourishing and low in caffeine. It is also a great tea for making iced tea and a good green tea for pregnant women.

The History Of Houjicha

Houjicha originated from Kyo Bancha. Kyo Bancha is a tea made from pruned tea leaves. Tea bushes are machine trimmed to give them a certain shape. The trimmings are basically waste, but those taken from the highest quality bushes, ones used to make matcha and gyokuro, are used to make Kyo Bancha.

The trimmed off tea leaves are processed similar to hoijicha, which is why Kyo Bancha is though to be the origin. They are steamed, dried and then roasted.

Houjicha came into being in 1920. A merchant decided to try and find some use for the leftover leaves, twigs and stems that were usually just disposed of. He tried roasting them over charcoal and his idea worked brilliantly. He had just created the first houjicha.

This happened is Kyoto, but The unique flavor and aroma of this tea was so popular that it quickly spread all over Japan. Today, houjicha is no longer made from waste, but from actual bancha. Sometimes it is even made from the higher quality sencha.

For more on houjicha check out the Wikipedia page.