Do a quick Google search for white tea caffeine or something similar.

What did you find?

Numerous websites, many of them even tea shops, that state white tea has less caffeine than green tea, which has less than black tea.

And it’s not just websites and tea shops. Even the US Department of Agriculture has made similar statements.

So what’s the problem?

It simply isn’t true, that’s what!

Sure some white teas may have less caffeine than some black teas, but in many cases, it is the exact opposite.

The highest quality white tea actually has more caffeine than most teas.

The truth is: the type of tea has no bearing on the caffeine content of that tea.

Instead, how much caffeine a tea has depends on factors like the strain the leaves come from, how young or old the leaves were when the were picked, and the way the were processed.

We’ll look at all that in a minute. First lets see why so many sources falsely claim that white tea has less caffeine.

Generally, tea contains about 15 to 70 mg of caffeine per 8 ounce cup (far less than coffee). There is a lot of variation in there, but the variation exists between individual teas, not between categories of teas, i.e. green tea, black tea, white tea, oolong tea, pu’er tea and yellow tea.

The truth is, it is difficult, even impossible, to say how much caffeine white tea (or any given tea) might have, without actually testing it in a lab. What we can do is examine which factors have the largest effect on caffeine content and then make an educated guess from there about a given tea.

So lets look at the main factors affecting the amount of caffeine in a tea.

These are the 4 major factors that have the most impact:

Based on this, we can make some generalizations about the level of caffeine contained in certain teas.

Teas made from young leaves and buds contain more caffeine, as do teas that are steamed and not roasted. Some examples are:

Teas made from more mature leaves and roasted teas have less caffeine. Some examples are:

The most famous white tea made the list of high-content teas above, so obviously we know where it stands. 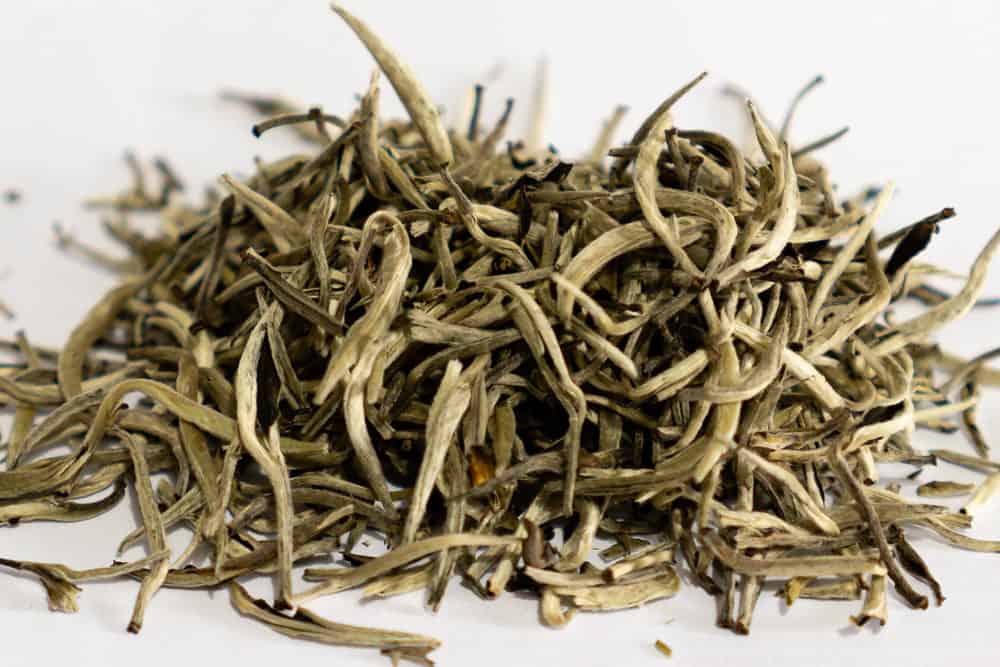 The highest quality white tea is made exclusively from the young leaf tips. This gives it its mild taste and high quality, but also gives it a much higher caffeine content than average.

It contains more than just about any black tea except for Golden Monkey and Golden Needle, which are made from the same young leaf tips. Of course, steeping time plays a role, too.

And people tend to steep black tea longer, so the cup ends up with more caffeine. But when it comes to white tea vs green tea, white tea generally has more caffeine, apart from matcha green tea.

White peony also contains the leaf tips, but mixes them with the next to leaves on the stem. All leaves used are young, but not quite as young as the ones use in White Hair Silver Needle tea. For that reason, white peony tea has a lower amount of caffeine than Silver Needle tea, but still higher than average.

Shou Mei contains a few young buds and then a few leaves that come after the ones used for White Peony and are thus older. As a result, it has less caffeine than the other types of white tea.

Why Does Everyone Claim White Tea Has Less Caffeine?

I’m not completely sure how this myth started, but I’m guessing it has something to do with the flavor. White tea is the mildest of all the teas made from true tea plants (i.e camellia sinensis), which might suggest that it is also mild when it comes to caffeine levels.

Back when white tea first started making inroads in the west, I could see that someone assumed it had less caffeine based on the flavor and wrote an article making that claim.

As is so often the case online, other bloggers probably saw that claim, took it at face value, and repeated it on their sites. Doing actual research takes work, after all.

And now we’ve reached a point where thousands of websites continue to spread this misinformation. So let’s see what the actual truth is.

This false idea about white tea could also come from the location. Many white teas come from Fujian province and tea growers in Fujian favor a variety of tea plant that contains less caffeine naturally. Perhaps that led people to falsely connect the two unrelated factors in their heads.

No matter where the idea came from, the important thing to remember is that it is false. White tea does not contain less caffeine than other types of tea simply because it is white and, on average, it actually contains more caffeine that most teas.

If you want to try some white tea, but are not sure where you can get good quality varieties, check out this post.

White tea tends to contain more caffeine than most other types of tea, though this can always be mitigated by using a shorter steeping time or fewer leaves.

The main takeaway is to not be fooled by the false information on so many health sites. White tea leaves are higher in caffeine than other types and not lower. The resulting tea is usually high in caffeine as well, whether it is plain or mixed with herbs or fruit like black currant.